A very long Seventeen (17) years ago, in 2002, I realized had a problem. I had an empty half-page to fill in our local SCA Newsletter, The Equinox, and nothing to put there. As usual with newsletters, there was a deadline to be met (publishing is like that), so I prevailed upon a friend, who quickly drew a comic panel making fun of someone else in our Shire — someone who fortunately was cool with that. The problem was thus handled, but when the void recurred the following month and I went to the artist again she let me know that one comic was simply her limit. She was a “One Strip Pony!”

I tried to persuade others in my Shire to contribute something (a drawing, a photo, a recipe — just about anything at all, within reason), but I was unable to convince a single person to contribute anything to fill that space. It just wasn’t happening.

Finally, realizing that my powers of persuasion simply were not up to the task, and inspired my her earlier effort, I took it upon myself to draw a single-panel comic strip to fill the space. I never in my wildest dreams thought that I’d still be drawing comic strips in 2019.

Strangely, because I still enjoy it, somehow I am still doing just that, and because I continue to be presented with humorous inspiration this is probably going to continue. I’ve also now (much to my own amazement) started doing two other comic strips over the past few years — one called “Antelope Tracks” for my SCA Household and another called “Heraldic Proceedings” to entertain fellow SCA Heralds. There is a bit of overlap in that a few comics get used in more than one strip, but since I am the “artist” I’m pretty sure I can give myself permission to do that, right??

Antelope Tracks is published to my household Facebook “Ty Gafrewig Wen” group twice a month on the 1st and 15th of every month, and quarterly in our Household Newsletter “The White Antelope” (a heraldic antelope being the primary charge on my SCA device or “coat of arms”). “Heraldic Proceedings” is published monthly to the Heraldrydiculous group (also on Facebook). In any case, I can only hope that all three will continue to earn the approval of readers and followers!

What follows are the Shire! Shire! strips included in the October Issue of The Equinox, and I hope some may enjoy them. 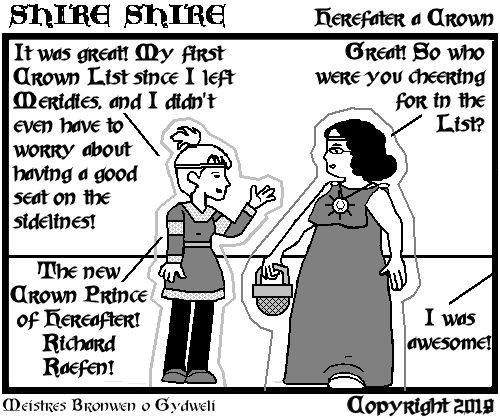