Back in late January my housemate Jason decided to mount the tractor and charge valiantly into battle to free what needed to be an open, grassy area from impediments like scrub trees and piles of dirt and rubble left since the Castle was built. He manfully toppled upstart sweet gums, displaced thoughtless rocks and chunks of concrete, discovered some very rich, dark soil and also uncovered what turned out to be three sections of iron-frame flat roof still covered with (mostly serviceable) tin roofing.

Inspired, he immediately determined to build a shed for the horses — since we still need some sort of rafters to put a roof on what’s going to eventually be the “real” barn — and with the auger equipped he bored holes, erected sections of retired telephone poles, and in short order had the basics completed — though figuring out how to get the first heavy roof section safely up on top did prove to be interesting.

He then began working to enclose three sides of the shed (the fourth to be closed with a gate that would also swing to do double duty closing off a pasture), and with only a couple of brief but frigid pauses dictated by snow and ice in January and February — and some actual paying jobs thrown in to complicate matters — he continued working both on that and on restoring the “former” clearing to an “actual” clearing.

But, as fate would have it, before he finished closing it in, and before he hung the gate he decided that he was not satisfied with the original shed plan. He wanted to expand it to be large enough to hold two horse stalls, so he erected more poles.

The project is still underway in March, but eventually we’ll have a serviceable temporary barn that eventually will be a sturdy and permanent equipment shed — and all of it built with scrap or recycled materials, left-over fence posts, and with very little having to be purchased. Huzzah!! 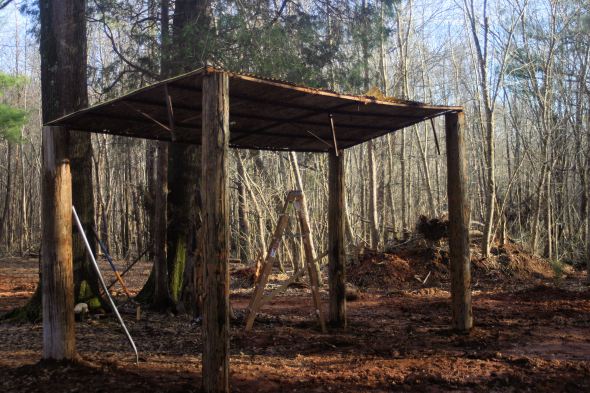 The first starting section (Valentine’s Day). Four retired telephone poles and a section of the roof we found. 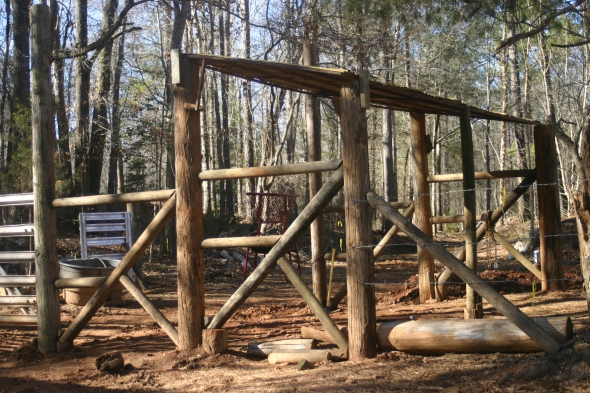 March 14th, the second section of roof frame added, but not yet covered. The back also still needs to be closed in, another upright pole added in front, and once everything is roofed and enclosed we plan to add siding of some sort.

Think it will serve?

Happily Ever After »
« Medieval Verse: The Viadera