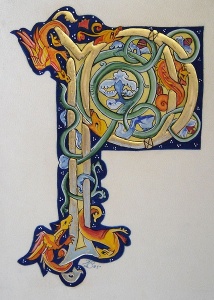 I write poetry because I enjoy doing so, and I challenged myself a while back to write at least one poem in each of the traditional medieval verse forms I found listed on-line. Partly, I was doing this just to see if I could, but also I figured the challenge would provide me with poems to publish in my monthly SCA newsletter “The Equinox”, and supply our local Arts & Sciences officer with items for her quarterly report, proving that Arts & Sciences are, in fact, actually being engaged in locally!

So now we have “Medieval Verse: The Cantiga de Amigo”

According to Wikipedia at http://en.wikipedia.org/wiki/Cantiga_de_amigo

The Cantiga de amigo (Portuguese: [k?~’ti?? dj ?’mi?u], Galician: [ka?’ti?a ðe a’mi?o]) or Cantiga d’amigo (Old Galician-Portuguese spelling), literally a “song about a boyfriend”, is a genre of medieval erotic lyric poetry, apparently rooted in a song tradition native to the northwest quadrant of the Iberian Peninsula. What mainly distinguishes the cantiga de amigo is its focus on a world of female-voiced communication. The earliest examples that survive are dated from roughly the 1220s, and nearly all 500 were composed before 1300. Cantigas d’ amigo are found mainly in the Cancioneiro Colocci-Brancuti, now in Lisbon’s Biblioteca Nacional, and in the Cancioneiro da Vaticana, both copied in Italy at the beginning of the 16th century (possibly around 1525) at the behest of the Italian humanist Angelo Colocci. The seven songs of Martin Codax are also contained, along with music (for all but one text), in the Pergaminho Vindel, probably a mid-13th-century manuscript and unique in all Romance philology.

In these cantigas the speaker is nearly always a girl, her mother, the girl’s girl friend, or the girl’s boyfriend. Stylistically, they are characterized by simple strophic forms, with repetition, variation, and parallelism, and are marked by the use of a refrain (around 90% of the texts). They constitute the largest body of female-voiced love lyric that has survived from ancient or medieval Europe. There are eighty-eight authors, all male, some of the better known being King Dinis of Portugal (52 songs in this genre), Johan Airas de Santiago (45), Johan Garcia de Guilhade (22), Juião Bolseiro (15), Johan Baveca (13), Pedr’ Amigo de Sevilha (10), João Zorro (10), Pero Meogo (9), Bernal de Bonaval (8), Martim Codax (7). Even Mendinho, author of a single song, has been acclaimed as a master poet.

Those are the period examples, but as usual I could not leave that well enough alone! I set out to compose one of my own, as demanded by “The Challenge”, and found that it was not particularly difficult to manage. After all, these poems are short and sweet, with several repeated lines, right?

So, the verse below is my own first attempt at a Cantiga de Amigo, and I hope you enjoy it!

Cantiga de Amigo No.1: Speak to me Mother

Buzz Words »
« The Rumor Mill and The Humor Mill