I looked through my collection of Medieval Recipes from various sources, and decided to try a pork dish. After all, I kept seeing pork on sale at the grocery stores, so why not!! So, After checking out the recipes for several dishes, I found one with common ingredients already found in my pantry and refrigerator as well! Imagine that!!

one 9″ pie shell with lid
1 1/2 # broiled pork, either minced, ground, or cut into small pieces
1/2 t. salt
6 egg yolks
2 t. ginger
1/4 t. pepper
1/3 c. honey
Mix together all ingredients, making sure the mixture is slightly runny. (If not, add more egg yolks.) Place mixture in pie shell, add lid, add some decorative steam holes or slashes to the lid, then bake at 375° F for 30 – 45 minutes, or until a golden brown. Serves 8.
Option: Add 1/2 cup of either currants, chopped dates, raisins, or pine nuts, or any combination of these ingredients.

This recipe is a variation, or “a-nother manere” of a pie called Tartes de chare, which appears on the same page as a-nother manere. The original Tartes de chare is a more complex recipe, and contains, among other ingredients, currants, dates, raisins, & pine nuts, which is why I have included them as an option in the redacted recipe. The addition of any or all of these items will dramatically improve the taste of the pie, so feel free to play with these ingredients in any combination that you find the tastiest. Personally, I find that the juice released by the currants as they bake greatly accentuates the flavor of the pork, and so almost always include them when I make this dish.

For this recipe I first slow-cooked a pork loin, and once it was done I didn’t grind up the pork. I pulled it apart, so it was more, well, “pulled”.

I planned to prepare ahead of time by getting currants and pine nuts, but the latter were not easily available in my area and I was warned that they sometimes had a bitter taste (also called “pine mouth”) that lingered for DAYS. I also decided, in the final analysis, that venturing out during a snow storm on the day slated for cooking probably wasn’t ideal either, so I planned on some additional substitutions. I did a bit of research, and discovered that walnuts or almonds could be substituted for pine nuts, and I decided to use almonds, because I actually had some on-hand. I also decided on using figs instead of currants because I had some of those in the pantry, too. So, snow and ice or nay, I was ready to go!!!

I didn’t really MAKE it that day, of course, but I was READY to!

The actual recipe, from that point onward, was easy to make a few days later, and it turned out very well indeed. I’ll admit that I cut the recipe in half, and used smaller, deeper containers than recommended, but the depth of the ramkins meant I was able to cook the dish at the suggested temperature and for the suggested time without overdoing it.

While I do like ham and bacon, I’m not much of a Pork eater, normally, because unless it’s cooked perfectly, or smothered in sauces, or (God Forbid) FRIED, I find that it’s often dry and tasteless. But this recipe was quite nice, and I’d rank it as a success! The almonds and the figs worked nicely as substitutions. The egg yolks held the ingredients together, the spices were nice, and the honey gave the dish a nice touch of sweetness. There was enough in one ramkin to serve two people WELL, and my focus group declared it DELICIOUS! 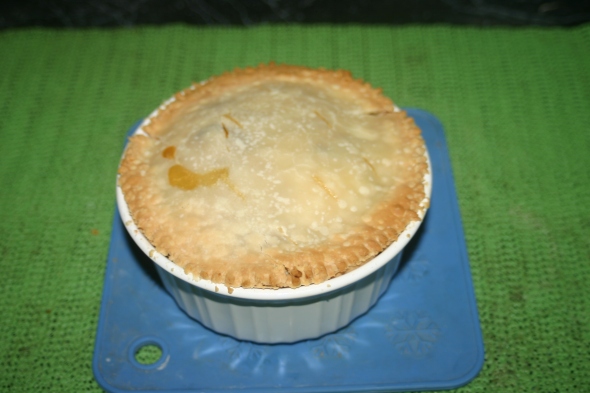 If you try it and like it, too, please let me know!

The Medieval Verse: The Partimen »
« Shire! Shire for January & February